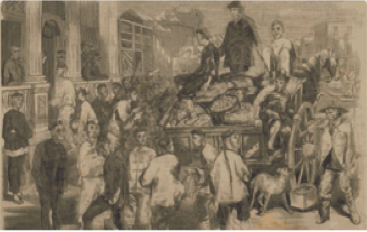 It was the discovery of gold in 1851 which attracted Chinese immigration to Victoria on a large scale. Ships sailed to Australia from Hong Kong with their cargo of men who had come in search of the “New Gold Mountain”.The small but burgeoning Chinese community in Little Bourke Street provided for all the needs of the diggers – lodgings en route to the goldfields, food, equipment and medicine.

In the 1860s many Chinese district associations began to purchase land in little Bourke Street to build clubrooms which would serve as meeting places for the Chinese community. From the early 1870s until the early twentieth century, Chinatown experienced a stage of growth. For as gold dried up on the diggings, those who did not return to China went back to Melbourne’s Chinatown which, for those who stayed, represented the only community they had. They found work and established businesses to cater for the local Chinese and non Chinese markets. The 1880s were the days of “Marvellous Melbourne”, the time when industry was booming.

The new labour laws combined with the effects of the “White Australia Policy” introduced in 1901 plunged Chinatown into darkness. It was no longer the residential haven for the Chinese, as the population declined alongside business. When the government eased immigration laws in 1947 Chinatown revived itself once more, spreading its population over suburban Melbourne. 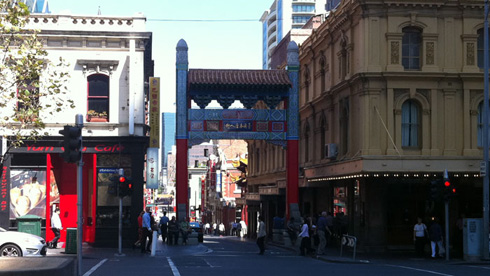 Chinatown remains a busy and important social and economic centre for the Chinese Community and proudly stands as one of Melbourne city’s most popular venues.

Chinatown today now predominantly extends along Little Bourke Street between Swanston St and Spring St. Its cabinet makers and lodging houses may now be gone but eating houses and top class restaurants now take their place with the streetscape and its low-rise brick buildings, retaining its historic character.

Throughout the year, there are many traditional festivals and activities, making Chinatown a popular destination in the city centre for local, interstate and international visitor.

The refurbishment of Chinatown’s 5 key arches was an important statement of the City of Melbourne’s commitment to Chinatown. The arches have been restored to their former glory with added modern touches including red neon lighting on the columns. The arches clearly announce the entrance to Chinatown.

Chinatown is a distinctive and well known area of Melbourne which dates back to the goldrush days of the 1850s. Importantly, Melbourne’s Chinatown is the longest continuous Chinese settlement in the western world. Chinatown’s essential character and main focus is along Little Bourke Street from Swanston Street to Spring Street, including the laneways and alleys which link the area to Bourke Street and Lonsdale Street.

The heritage streetscape has been well preserved, with few buildings reaching over three storeys in height. The area is dominated by restaurants from fine dining to laneway and arcade noodle houses, and is home to a number of Asian grocery stores, Chinese medicine and herbalist centres, bookstores, fashion boutiques and other retail outlets in arcades such as the Village Centre, The Target Centre and Paramount Plaza. True to its name and predominantly of Chinese ethnicity, you will also find Melbourne’s Chinatown is truly cosmopolitan with a myriad of cuisines like Thai, Japanese, Malaysian, Vietnamese, Contemporary European and Australian to tempt your taste buds.

As a 24 hour precinct, improving the streetscapes, image and atmosphere in Chinatown has also been a priority, and this has included kerb widening, bluestone paving, bright street lighting combined with neon signage that creates a distinctive chaotic night time feel.

The Tianjin Garden marks the eastern entrance of Chinatown at Spring Street. This is an important icon for Chinatown that has been collaboratively conceived by designers from Melbourne and Tianjin. The Garden provides a relaxing area with its water feature, pavilion, and seating space for visitors, office workers, families and students.

The redevelopments of the Chinatown Plaza in Cohen Place incorporates greening, lantern lighting, rock sculptures and a place for people to relax during break times. The beautiful refurbishment of the ‘Facing Heaven’ archway is the perfect backdrop for many photographers and tourists.

The refurbishment of Chinatown’s 5 key arches is an important statement of the City of Melbourne’s commitment to the Chinatown Precinct. The tall striking and neon lit arches clearly announce your arrival into Chinatown.

This magnificent archway was hand made in China according to traditional techniques and materials. It was shipped to Melbourne in many pieces and assembled in Cohen Place under the supervision of highly skilled Chinese craftworkers. It’s the perfect backdrop for photographs and the main entrance to Cohen Place, Chinatown Square and the Chinese Museum.