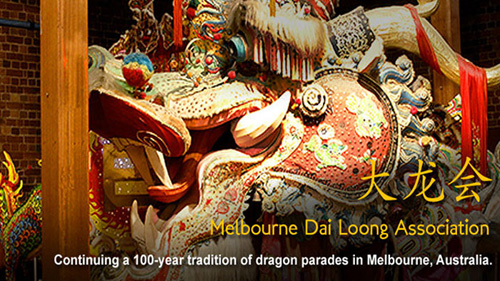 The Millennium Dai Loong Dragon was commissioned from the Foshan Arts Institute China in 2002 with its first parade during Chinese New Year in 2003.

The Millennium Dai Loong Dragon requires over 200 people, which involves volunteers from the community to participate in many facets of the parade. To stage a procession, there are two lion dance troupes; a musical percussion group; carriers of traditional weapons, mythical creatures, traditional banners, flower baskets – all who have particular significance – and of course, around 100 dragon legs. Traditional processional dragons are hand made from embroidered fabrics, fur, sequins and mirrors all glue or sewn and tied onto a bamboo frame.

The Millennium Dai Loong Dragon is awakened every year with a ceremony of offerings to the Gods followed by a lion dance. The Dragon is brought from the sea to the sky in the parade by enticing him with the pearl of wisdom, which belongs in the protrusion in his forehead.